We’ve all driven to work during school holidays and noticed that peak hour traffic is significantly reduced. New research conducted by Griffith University in Queensland has shed light on exactly what is happening. The study has identified that students being driven to private schools has a disproportionate impact on traffic congestion. In recent years private school enrolments have risen sharply in Australia and car trips to private schools are often twice as long as to public schools. The research findings as reported by the ABC are fascinating.

Some key points raised by the article include:

How is RollCall helping?

When we created RollCall we had planned primarily to make an impact on student safety in schools. However, there is now a host of other benefits that are coming to light. Most importantly, in the context of discussing congestion, we have found that schools that introduce RollCall are able to increase school bus utilisation. This means more kids on buses, fewer car trips, and less congestion – particularly at peak hour.

Specifically, it is with RollCall’s Smart Route tool  that schools are able to accurately map routes to get more children onto buses. Not only are buses the safest medium for children to get to school, bus travel also reduces the school car traffic and dramatically reduces the space required for parking.  See the diagram below for details. 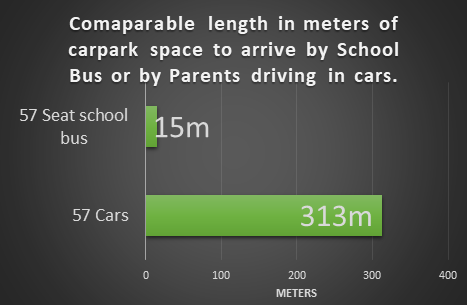 Recently, we reached out to all our clients across Australia and New Zealand  and asked for feedback as to how RollCall has impacted their school life. The response has been overwhelmingly positive, and apart from the obvious improvement to safety and student visibility, the themes that keep coming up are:

On the last point, we are now working with educationalists to build a module that can be studied in schools. The modules would be delivered in environmental classes and would discuss and quantify the impact of RollCall in reducing the school carbon foot print. We are passionate about this as everyone who works at RollCall truly cares about climate change and feels that what we are doing can have a positive impact.

About the Author: Dean Langenberg